I have learned a number of things along the way.  I am new to control loop implementation and while the algorithms are well known and documented along with plenty of example code, the first thing I learned is that none of that helps you when it comes to tuning the operation of the PID in the specific environment in which it runs.

There are those among us that can describe in glorious detail the math behind all of the theory and implement MatLab simulations of motor transfer functions.  That, unfortunately does not describe me.  While I have a PhD, it is only in the school of "hard knocks" as my experience is my instructor.

Tuning PID control systems is as much art as science.  For a given fader (in my case) one could come up with PID tuning parameters by experimentation that would perform acceptably.  However, with the wide variance in acceptable performance from the manufacturers, it is a challenge to replicate that experience across an arbitrary number of faders from the same vendor.  My vendor for example specifies that the force required to move the fader is .8 newton which in and of itself is fine, just that the expected acceptable variance from this specification is plus and minus .5 newton.  Using a fader with specifications such as these is typical, but results in extreme difficulty when designing to have consistent results across multiple batches of the same fader model.  The variation in performance resulted in what initially looked like a 70% failure rate in being able to calibrate them.  However, my initial design failed to take into account the fact that the initial batch had very low friction profiles.  Comparing the experience to the datasheet, led me to conclude a different design (velocity PID) was required.

A number of desirable design elements are useful when designing control loops for motorized faders.

Where it lacked robustness however was in dealing with changes in position that are very small and at an irregular arrival rate and rate of change.  Think of moving a control very slowly and sampling it's position on a 100-200 ms basis and using that as the set point for your PID.  Goal #1 above suffered greatly.  Attempts to tune this with three different sets of tuning parameters achieved reasonable results, but goal #4 was impossible to achieve with a positional PID alone.

The only way to achieve all of these goals was with a control loop that would set the fader moving in the right direction according to a motion profile and tightly control the velocity of the fader movement.  The control loop could apply as much or little force as necessary to keep the movement on the velocity profile desired.

There are (at least) a couple of standard forms of PID algorithms, one that works to control the position of something and the other to control the rate of change of something.  I found that I could use the first form (so called analogue PID) to control either in this case.  In the positional PID, I measured the position of the fader by reading the DC voltage across the fader potentiometer using an ADC.  The input to the PID was the current ADC value read from the fader.  The PID would compute the necessary PWM output to drive the motor to the desired position.

In the case of the velocity PID, I kept a history of fader positions over a 5 ms period.  The position is calculated every 250 us.  The difference between the newest and the oldest position samples provided a velocity with sufficient granularity to be useful.  This velocity value (current velocity) was used as the input to the velocity PID.  The calculated PWM output value was use to drive the motor to adjust the movement to the desired velocity regardless of varying friction, voltages, etc.

A couple of traps in implementing the vPID (or for that matter, any PID).  When tuning, you should always start very non-aggressively and only change one thing at a time.  General tips:


One area that is not discussed as much in the various resources available is the importance of not only controlling the velocity, but having the decision about what the desired velocity is be able to change as appropriate.  For example, one could merely state that when faders move, they always move at a single constant velocity.  This is perhaps a too simple solution.  Single set point movements (from A to B) occurring infrequently, this may well be sufficient. Tiny incremental changes you end up with overshooting and backing up (overshooting again) etc.  What is necessary is a motion profile that will decide what the velocity should be for a given movement.  This can be as complex or simple as will meet your needs.

In my case, I allow the PID tuning to dictate how rapidly the fader is accelerated and the maximum velocity allowed is the set point for the vPID.  To determine that set point, I chose to use the distance to the positional set point to determine the velocity.  Basically, the further we have to travel, the faster we will go (up to a maximum limit) and then as we approach the set point, we slow down on that same profile.  It ends up looking something like this: 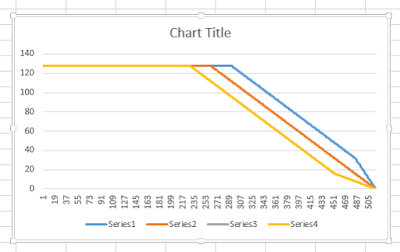 This represents three different deceleration profiles that were tried.  The blue line represents my original design where up at the top of the graph, we are cruising along at the maximum velocity.  As we get close to the target, we begin to decelerate at an initial rate and at the end we increase the rate of deceleration until we stop.

Due to the inherent delays involved in filtering the ADC values, I found that with this profile, I was consistently overshooting my set point position.  The amount of overshoot was proportional to the length of the move.  Flattening out the curve slightly as seen in the red line, improved the overshoot condition, but not sufficiently.  In the end, my profile looks like the yellow line where we begin decelerating a little sooner and decrease the velocity at a slower rate approaching the set point.  This has allowed me to accurately position faders and meet all of the requirements above.

There are other details that require attending to.  Most DC motor controller chips have the ability to apply a braking action to the motor movement.  When coming to a stop, you should definitely apply the braking action.  However, be careful that you do not release the brakes too soon.  There is a fair amount of inertia in the system and these motors don't stop on a dime.  The actual stopping time is a function of the velocity, mass and friction profile.  For the simple minded among us (me) this translates into something other than a brake tap.  I apply the brakes when in range of where I want to stop plus or minus some delta and then hold them, in my case for about 4 ms before releasing.  Without this action, overshooting is a very real problem.

So with a 250 us cycle of determining the position, keeping 5 ms of positional history to measure the velocity and applying the new PWM value to the motor resulted in very smooth and precise operation.  Reducing the fader update rate to 1 ms was also very nice with small steps in position being only slightly more apparent.

I have initially implemented this on a 120 MHz Cortex M4 processor that supports floating point hardware.  Now that I have the implementation details worked out, I will be experimenting with simplified fixed point implementations on Arduino hardware and will of course post my code for that as it develops.
Posted by Jeff ko7m at 21:27 2 comments:

The wind and rain today didn't seem to stifle fox hunters out looking for my four foxes.  Unfortunately, it seems I will need to make some changes as with the very short loop antennas that are in use for direction finding, folks were having trouble hearing the foxes without getting quite close to them first, at least for the 30 metre frequency.  Not too many takers on the VHF frequencies, so I think for tomorrow I will turn off the 2 metre beacon and just use the 30 metre CW beacon.  I will need to add a counterpoise to the antenna however to increase it's range a bit.  I could hear all the foxes with a small handheld Grundig receiver using a short whip antenna, but most folks reported having to get quite close to the transmitter before they could hear it at all.

With the kind of event we are running here, folks are not going to traipse all over the place to get to the point where they can hear the beacon.  They need to be able to hear them (or most of them) from the starting point or they will give up before venturing too far afield.

So, some lessons learned.  I will increase the range and verify they can all be heard at the starting point with the simple loop antennas we are using for tomorrow's group of hunters.
Posted by Jeff ko7m at 23:14 No comments: