I have put together the recent bits and pieces of test code that I have been playing with to control my AZ/EL servo camera mount and an Arduino port of the old Plan13 code, originally written in Basic back in 1983 by James Miller G3RUH.  You can read about his efforts over on the AMSAT web site here.  Jim gives a great treatment of the math involved and example code in Basic. 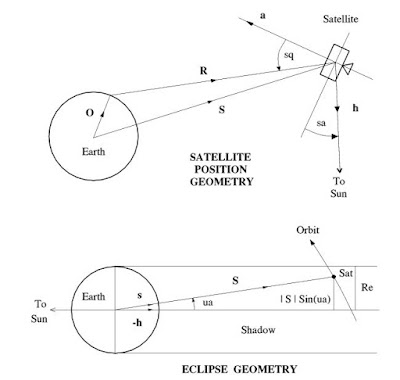 A port of the code described on the page above has been made to the Arduino and I leveraged this code from the QRPTracker project web site.  With some simple changes, I have pulled together a simple satellite tracker to drive my AZ/EL camera mount.  It should be simple to scale this up to drive an actual satellite antenna array. 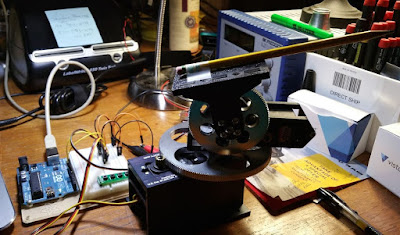 Here you can see the project pointing to the point in the sky where the ISS would be located at a point in time today.  I took the AMSAT Keplerian elements and processed the six passes today where the satellite was above the horizon at my location.  The code currently processes the entire 24 hour period in a day, and tracks in real time each of the passes.

The implementation of Plan13 is not particularly accurate due to the limited precision available in single precision floating point on the Arduino, but with the broad bandwidth of most amateur 144 and 440 MHz antennas, it is of little consequence even if the accuracy was only to the degree level.  In fact most low earth orbital satellites can be worked with a fixed elevation on a standard yagi, but the project has been interesting.  If there is interest, I will post my code, though most of it was gleaned from the efforts of others.

Beyond the code I have previously published, I have changed the mapping of the azimuth servo to be clockwise from north to match a magnetic compass.  I limit the calculated elevation values to those angles physically possible with my AZ/El mount.  I prevent movement of the servos if the satellite is currently below the horizon.

I would like to put a real-time clock in the circuit and have it calculate and pre-position the antenna to the point where the satellite rises, add a simple display, add the ability to load Keplerian elements from a wifi connection to the internet and provide for calibration of the servos.

On an Arduino Uno, I am able to load the entire two line elements (TLE) set from here into flash.  I have written a routine that will print out the start of every visible pass for my location for every satellite in the list (89 of them).  I suspect that it will be unusual to have the entire set in flash at any given time, but it can be done and still have room for the code.  Alternatively a storage card could be used to store the data.

On the mighty Arduino Uno, this table fills much of the flash and calculating the position of all 89 satellites for every minute of a 24 hour period takes quite a while.  A better approach might be for the process that grabs the KEPS also pre-calculate the start of pass and just generate a table along with the KEPs table.  This table could then drive a higher level process  to allow the selection a which satellites you want to track today.

The code calculates the effects of doppler and provides a tuning frequency for both the uplink and downlink if the frequencies are provided prior to the calculation.  For now I am passing in zeros, but a table of satellite frequencies and a bit of glue code to drive tuning a transceiver could fully automate tracking and tuning tasks.

This has been lots of fun and a precursor to building a LEO satellite station, but for this particular hobby AZ/EL mount, my next task will be to calculate the position of the sun and use this mount to keep a small solar panel array pointed at the sun for battery charging.  For that particular task, I am thinking of trying out a couple of approaches.  The first would be to calculate the position of sun relative to me as an observer.  The second would be to use an analogue approach where the output of the solar panel is used as feedback to drive a correction to the AZ/EL servos to keep the panel at maximum output regardless of the position of the sun.  I suppose in theory, I could just set the device out in the sun and let it figure out where to point to maximize output.  Who knows, it might decide to point at a white wall rather than at the sun when currently behind tree cover for example.  Should be fun!
Posted by Jeff ko7m at 00:16 5 comments:

This little project has been lying around waiting to be done for far to long, so I have resurrected it on a rainy Sunday and hope to make something useful out of it.

I have this little AZ/EL camera mount pair of servos that are quite stout.  They have external feedback potentiometers for the servo position, so even though they are geared down, they can be accurately positioned. 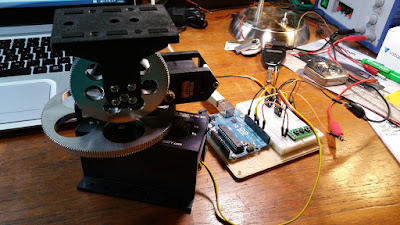 Coupling these up to an Arduino UNO is trivial.  I need one signal pin, power and ground.  Do not try to power servos from the USB power on the Arduino, use an external power supply.

The first task at hand was to decide on the range of pulse widths that would be allowed for the servo.  The defaults are 544 us to 2400 us.  The APIs decide that if you set a pulse width less than the minimum, then it must be an angle in degrees 0-359.  I didn't take the time to sort this out.  Instead, I decided arbitrarily that angle zero is 500 us. and everything is counterclockwise from there.

I placed a mark on the Azimuth gear right at the servo gear and through experimentation determined that a change of 768 microseconds would rotate the gear 360 degrees. 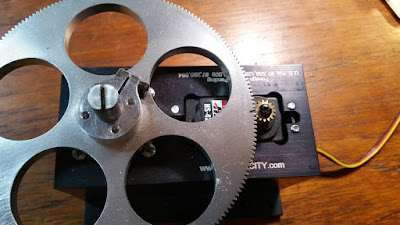 From there, it was simple to create a function that would convert an angle in degrees to the required microseconds pulse width to position the servo as desired.

Now in the case of the elevation servo, we have some limitations to the range of motion due to the physical characteristics of the assembly.  I decided first to figure out where level was and call this zero degrees of elevation. 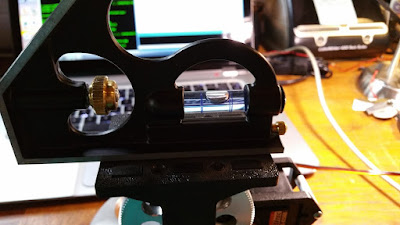 Next I determined the setting for negative 45 degrees of elevation (pointing down). 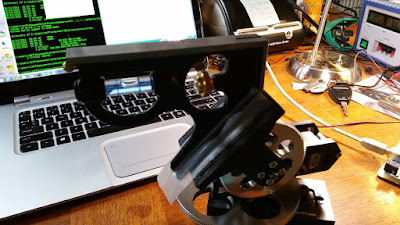 And finally, I determined the setting for pointing straight up.  Now it was trivial to create a function to map degrees to these settings.

Now with the addition of a button, I have a simple test application that will postion to zero degrees azimuth and elevation when started and then move to 90 degrees elevation and 45 degrees of azimuth when the button is pressed..

So, next I obtained the Arduino port of Plan13 which is a port of some very old basic code for determining a satellite location given the latitude/longitude/elevation of an observer, the Keplerian Elements for the satellite of interest and the date/time of interest. Keplerian Elements (or just Keps), named after Johann Kepler [1571-1630] are a set of seven numbers called satellite orbital elements that define an ellipse oriented about the earth and place the satellite on the ellipse at a particular time.

The remaining work is to provide a little more glue logic to have what amounts to a desktop pointer to the satellite as it passes overhead.

July 10-12 this year our QRP ham radio group had our annual camp-out at Valley Camp in North Bend, WA.  We have a lot of fun hanging out together and have great technical talks as well as ham radio operating at QRP levels (low power).  We also have fun activities like hidden transmitter hunts.  Here are a couple of the participants on the hunt. 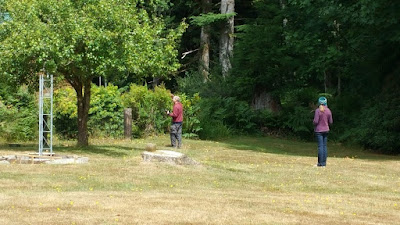 This year, the group had about 100 contacts split 75%/25% between US and DX contacts.  Since this was the 10th annual event, I decided to make up some custom QSL cards to send to all the contacts we made over the weekend. 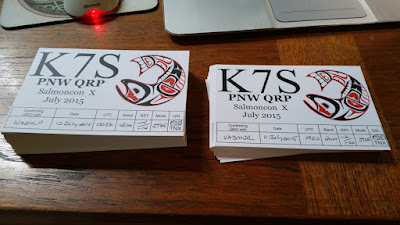 I got all of these cards finished up today, addressed, stamped and in the post.  So if you worked K7S during the weekend of 10-12 July, look for your QSL card in the post soon.
Posted by Jeff ko7m at 18:04 1 comment:

I have been having a play around with seeing how much serial speed I can get out of a standard Arduino Uno when it isn't really doing anything else.

I decided to try 1M baud initially on the standard Serial port.  The code I used is as follows:

I didn't even consider using the standard Serial Monitor application built into the IDE and instead grabbed a copy of PuTTY and set the serial port up at 1000000 baud. 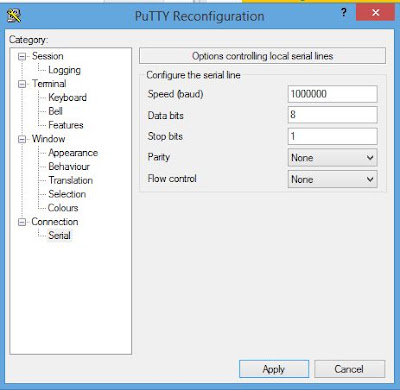 At this baud rate, the Arduino had no issues and PuTTY correctly decoded the serial stream without issue.  So, if 1M is good, then 2M should be twice as good, right?

Well, not exactly.  at 2,000,000 baud the per character rate is twice the rate, but the overall throughput actually dropped visibily.  By my crude measurements, the throughput dropped by about 15%.  But, it is good to know that Arduino can push serial bits out at a respectable speed.

One side effect to note is that the IDE must override the Serial baud rate in order to program the device.  When running at these very fast serial rates, it can be a bit hit and miss.  If you have trouble, press the reset button and release it just before the compile finishes and you will help it recover.  Another alternative would be to use an external ISP programmer.

Another thing to keep in mind is that the IDE and PuTTY are both going to try and use the same COM port.  The IDE will use it for programming the chip.  PuTTY will use it to monitor the serial output.  In order for the IDE to be able to program the chip, it must be able to open the serial port.  So, you will have to terminate PuTTY before attempting to reprogram the Arduino.

I have read a lot of complaints lately about trying to debug Arduino code with the serial port output.  While upping the serial speed will not help in situations where interrupts are disabled or where time required to output debug data adversely affects the running code, being able to output the data orders of magnitude faster is certainly going to help in general.  If you are doing a lot of edit, compile, flash, run cycles, it might be better to use an ISP programmer so that PuTTY or whatever serial terminal application you use can stay connected to the debug serial port.

In my work with faster embedded processors, 2-3M baud is about the limit even on these devices with much faster core and peripheral clocks.  The Freescale K60 for example is running at 96 MHz in my configuration and at 2M baud on the debug port, I still get data loss, but it is solid at 1M baud.  I think that for high speed output or where you need to output debug information during interrupt processing, it may be a better choice to use SPI for debug output to a dedicated device that can capture and save the output such as a PC with a USB/SPI interface or another Arduino that can write to a storage device such as an SD card.