I am having a play around with a the much discussed Adafruit Si5351 clock generator board this morning while waiting for a phone interview.  It is a nice bit of kit and will be handy for a number of frequency generation needs.  The device comes on a small break-out board.  The only soldering required is to hook up the 0.1" header pins if desired for breadboard work and to mount three SMA connectors on the edge if desired.  There are three clock outputs brought out to the SMA connectors, but also to three header pins. 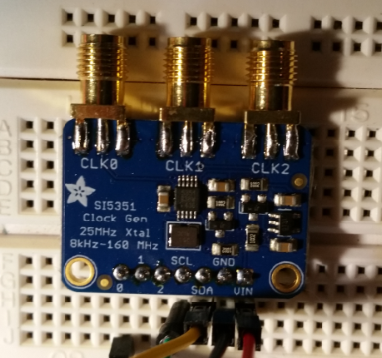 The device is an i2c device addressed at 0x60 so only power, ground and two i2c wires are necessary to get it oscillating.  Since so much has been written on this module previously, I won't bore you with recreating all of that here.  I decided to use (N6QW) Pete Juliano's "Let's Build Something" project as the starting point.  You can see Pete's project pages over at http://www.jessystems.com/.  Pete also has a great series of videos on his youtube channel here.

The device is a 3V3 device, but the board sports a nice LDO voltage regulator to allow powering from a 5V rail. 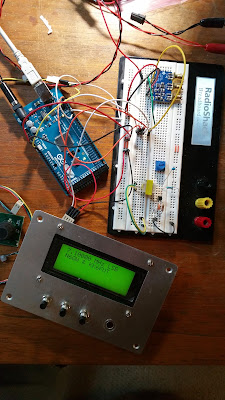 Pete has the unit set up to cover the 40 metre band for a homebrew SSB rig.  The IF frequency appears to be 4.9136 MHz, for a display frequency of 7.1 Mhz, the oscillator is being set to 12.0136 MHz.  The signal looks pretty good, right off of the output pin. 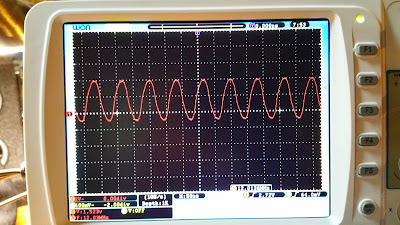 I removed the IF offset from the oscillator frequency setting to output the displayed frequency.  At 7.1 MHz, the signal is somewhat less sinusoidal.  At low frequencies the device outputs a square wave with a bit of overshoot.  As you go up in frequency, the waveform below is prevalent which is really still the same thing, though the rise and fall time as a function of frequency is longer.  The waveform above is nearly sinusoidal at 12 MHz though above about 25 Mhz, the overshoot returns. 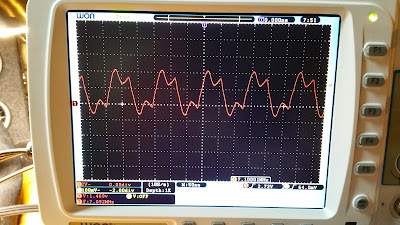 The output voltage at 1 MHz is about 3V3.  At 30 MHz, the peak-to-peak drops to about 0V5 with about a 2V positive DC offset.  Above 32 MHz the voltage level begins to rise again.  There are several of these peaks and valleys in amplitude as you continue to go up in frequency.  Above 35 MHz, the waveform appears to be mostly triangular.

As time allows, I plan to experiment more with this little device in my projects, but just wanted to have a quick experiment to get the device up and running.
Posted by Jeff ko7m at 12:45